How the New Tax Bill Will Impact Anesthesiologists’ Personal Taxes 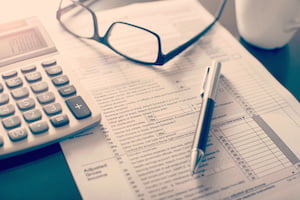 This article is about how the new tax bill changes personal taxes. If you want to know the types of changes that have been made to anesthesiologist business taxes click here.

On December 20, 2017, Congress passed a new tax bill that has been touted “the most sweeping tax overhaul in 31 years.” Ever since the bill’s passage, we have been getting tons of questions about how the new tax bill will impact the take-home for high earning individuals, like anesthesiologists.

The new tax bill is the biggest tax overhaul in 31 years.

Navigating the 600-page bill is an incredibly daunting task (not to mention time-consuming waste of time), so we hosted a webinar to review everything that impacts anesthesiologists. We also answered some of the most common questions anesthesiologists have about how they can maximize the benefits and minimize the downside of the new tax bill.

You can jump straight to the webinar recording…or just keep reading to learn about the most important aspects of the new tax bill that impact your personal taxes.

Some Basics About the New Tax Bill

One of the most important things to note is that the tax cuts for individuals will expire in 2025. In addition, although these tax laws have been written and approved, we do not yet know how they will be interpreted. The regulating bodies that writes the implementation regulations and guidelines have not yet released much information, therefore, our understanding of how the new tax bill will impact anesthesiologists may change as guidelines are released.

Sign up here for updates as new regulations are released to understand exactly how the new tax bill will impact your 2018 personal taxes and what you can do to minimize them.

Where an individual or joint filling couple lives will have a huge impact on how much the new tax bill will save (or cost) them. Generally speaking, low tax state residents will generally benefit immensely, while high tax state residents much less so. Similarly, medium and higher earning anesthesiologists will tend to do better than lower paid or part-time anesthesiologists. However, the details of your situation matter: the size of your total income, whether you rent or own your house, your spouse’s earnings, etc can have a big impact.

As you can see in the following example, while the savings are similar for John’s relatively low salary regardless of his location, Mary’s high earnings create a tax savings that differs by almost $35,000 depending on whether she is filing from California or Florida. 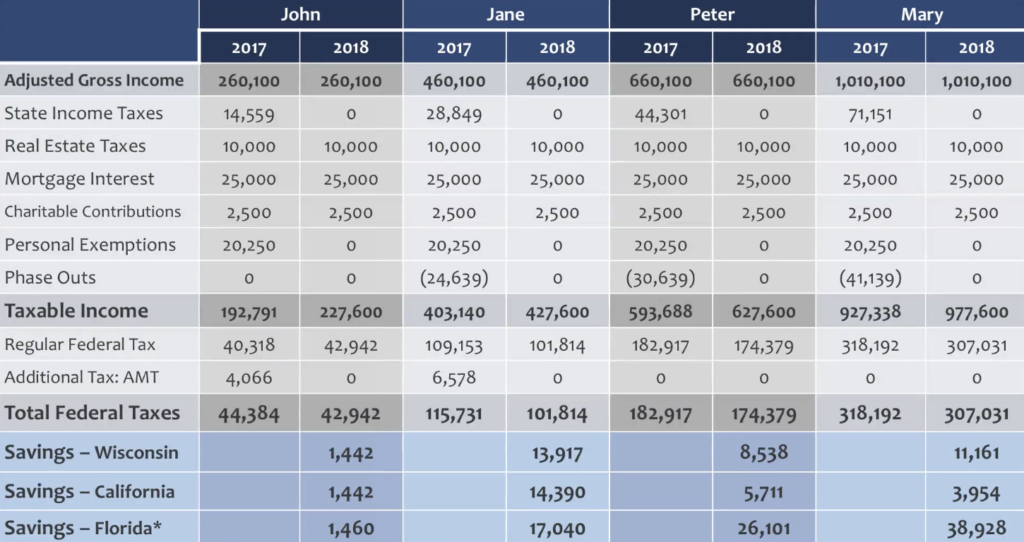 The new tax bill redefined the tax brackets and recalculated how the alternative minimum tax comes into play. Although the number of tax brackets remains the same (seven) the minimums and maximums have been shifted to be lower overall with the highest bracket at 37% rather than the previous 39.6%. The “married filing jointly” tax brackets continue to be double the amount of the “single” brackets except for the two highest categories. 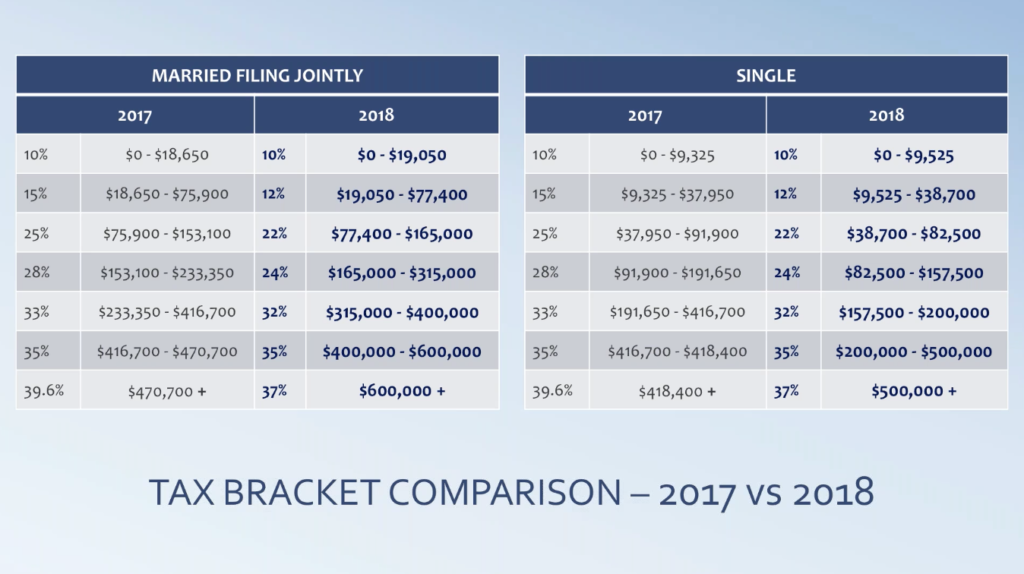 Tax cuts for individuals expire in 2025.

Individuals can claim personal deductions and exemptions for themselves and each dependent, but with many anesthesiologists making over 300k, these deductions began phasing out and were eliminated for those making over 430k. 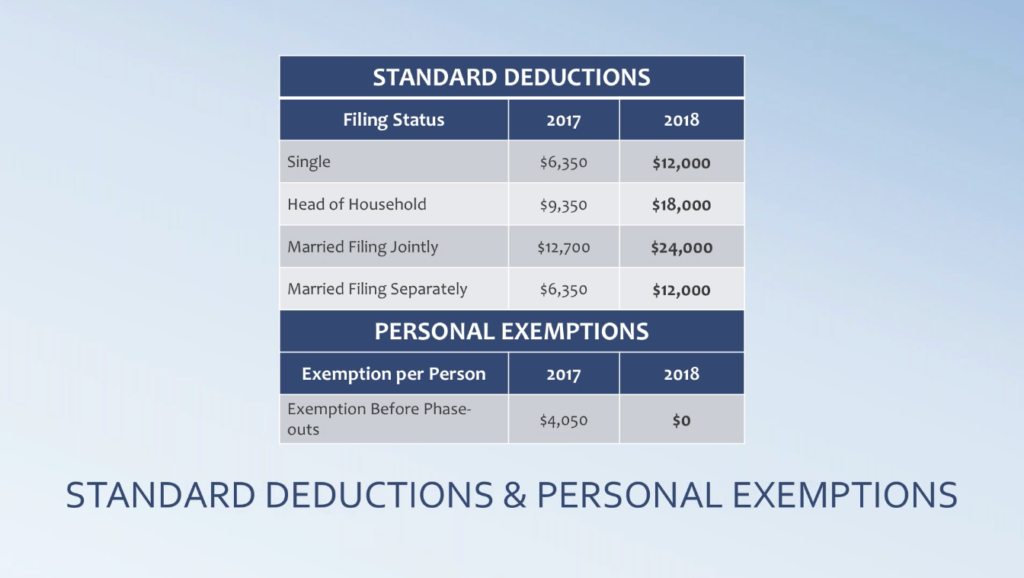 Changes have been made to the standard deductions, in hopes of simplifying tax filings for individuals who previously itemized their deductions. Of course, this has the side effect of making it harder to get to a deduction level where itemization is advantageous.

Schedule A itemized deductions have also been changed: 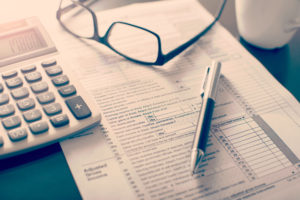 The shift in tax brackets and changes to deductions also impacts what is known as the Alternative Minimum Tax. This tax was created in 1969 to ensure that wealthy filers could not utilize so many loopholes and deductions to avoid paying any taxes. This forced virtually everyone, regardless of income level, to pay at least some taxes by eliminating certain deductions and taxing at a flat 26% or 28% rate.

The AMT was established in 1969 but has never been indexed for inflation.

Even though the AMT was established almost 50 years ago it was never indexed for inflation. As a result, as more Americans began to make higher incomes, more and more people were forced to pay this tax. Households making between $200k and $500k were forced to pay this tax. Filers with high state income taxes, real estate taxes, personal exemptions, and deductions paid, were most likely to be hit by AMT.

The new tax bill now calculates where this tax must be paid using the following guidelines when it comes to preference items:

These have been implemented into the regular tax calculations, significantly reducing the number of people that will be impacted.

It’s less likely that you will have to pay AMT under the new tax law.

In addition to changes that impact common elements of personal tax, there are also a few other miscellaneous changes that have been implemented that have garnered a lot of questions. Here are some of the most common changes we have been asked about: 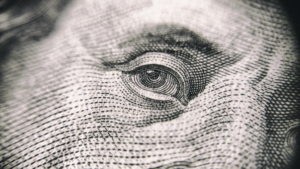 We provide both personal and business tax preparation and planning services as part of our full-service approach to billing services for anesthesiologists and anesthesia practices.

If you want to know what kinds of changes have been implemented for businesses, check out How the New Tax Bill Impacts Anesthesiologists’ Business Taxes.

For more details about the tax changes, watch the complete webinar replay. We will be updating this blog as new regulations are released that explain some of the specifics of how these new tax laws will actually be implemented and enforced by the IRS. Once enough regulations have been released for us to build a better tax planning framework for anesthesiologists, we will put out a new tax planning webinar… just for anesthesiologists… as always.

Or, if you have specific comments or questions, feel free to contact us directly.

Subscribe to The Anesthesia Min to receive a monthly update of the best articles on the business of working in anesthesiology.

See all of the eBooks that we have published in one place.

Do you have an A+ Anesthesia Billing Service?

Get the 10-step How to Start a Practice checklist!

Download our Free eBook: Transparency in Anesthesiology Billing: Everything Your Billing Company Doesn’t Want You to Know

Everything that Anesthesiologists Need to Know

See the appropriate billing and collections opportunities that your current billing systems are missing.