Most anesthesiologists collect less than they are entitled to receive for their services because the billing and collections process in America is fundamentally broken. Very few anesthesia billing companies have the expertise, commitment, or infrastructure in place to correct for this.

Too many anesthesiologists are being taken advantage of by both the impersonal behemoths of the industry and smaller “discount” billing companies. These companies bill the easy money and leave the rest— as much as 15% of the collectable total—on the table. That’s your money they’re not collecting.

We typically increase our clients’ take-home by as much as 15% just by collecting the money that they were already owed but didn’t collect.

All of our coders are certified by the AAPC and deeply experienced with anesthesia billing. They know every anesthesia code, modifier, qualifying circumstance, anesthesia type and have a complete understanding of how to determine the correct run time for anesthesia services.
There’s no substitute for specialized expertise.

Anesthesiology is a unique specialty.
You need anesthesia billing specialists who understand it thoroughly. 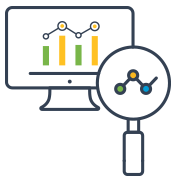 Generic “medical billing” software is not going to bring your anesthesiology group to maximum collections. While there are certainly some commonalities across billing processes for the various specialties, there are also some key differences.
Fusion Anesthesia’s systems are a hybrid of commercial billing systems, custom-developed reconciliation and reporting software and databases… all developed and maintained specifically for anesthesia billing.
At Fusion Anesthesia, we check claims multiple times through automated systems, humans in-house, and statistical sampling of all claims for auditing.

There’s a dirty secret in the industry that nobody wants to talk about:

Payers frequently don’t pay in full according to their agreements with providers.

This isn’t a matter of rejected claims or coding disputes … payers are simply underpaying clean claims compared to negotiated rates. It’s hard to see because the contracts, claims, and random overpayments and underpayments create a huge volume of noise.

However, after analyzing hundreds of thousands of claims, Fusion Anesthesia can prove that anesthesiologists are consistently underpaid by most payers.

In other words, the payers are cheating you. And most anesthesia billing companies let them.

The only way to combat these systemic underpayments is to reconcile every payment versus contracted rates on a line-by-line basis.

Using our proprietary database of contracted rates paired with customized software, we cross-check every line item of every claim to be sure that it meets that payer’s contracted rate with that provider. When we find a mismatch, we automatically reject the payment.

We kick back a lot of underpayments. Don’t leave that money on the table.

As far as we know, we’re the only billing service who does this.

Ask your billing company for a line-by-line reconciliation for the past six months. If it doesn’t show that they were kicking back a significant percentage of the claims for payments that didn’t meet your contracted rates, then you are almost certainly being short-changed.

In addition to anesthesia billing services, we have comprehensive practice management services available including:

Want to know how much more you could be making?

Get a no-obligation 6-month comparative analysis.

Find out if we can increase your take-home as much as 15%.

Do you have an A+ anesthesia biller?

Want to know what we do?

Download our services fact sheet to get all the details on the services we provide for our clients. 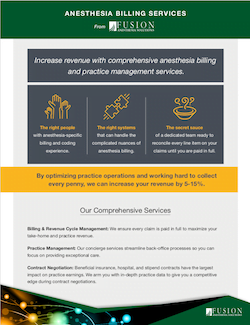 Get the 10-step How to Start a Practice checklist!

Download our Free eBook: Transparency in Anesthesiology Billing: Everything Your Billing Company Doesn’t Want You to Know

See the appropriate billing and collections opportunities that your current billing systems are missing.